The engine pad was stamped with the engine assembly plant, assembly date and application code.  The location of that code was behind the distributor on L6 engines and in front of the passenger’s side cylinder head on V8’s.

The format of the engine code remained the same from 1964 through 1970.  Plant-Month-Day-Application suffix code

Here are the engine block casting numbers used for small blocks and big blocks. The casting date on the L6 block is on the right side. It is located on the rear, top left (driver’s side) for all others. Casting numbers could be used for multiple engine displacements during the same model year. The same block could appear in both 2-bolt and 4-bolt main configurations, depending on application. Multiple casting numbers were sometimes used for the same application in a model year.

All other blocks used a Month, Day, Year format.  The letter is the month the block was cast.  A is January, B February, C March, I September, L December. etc.  That is followed by the day of the month it was cast and the year. E 13 5 would be May 13th, 1965.  On small blocks, the casting date was located next to the casting number.  On big blocks, it was located between the freeze plugs on the passenger’s side.

The casting date is usually less than 30 days before the engine assembly date.  However, some can be several months earlier or longer.  Those cases are rare.

The transmission code consisted of the type of transmission and the date it was assembled.  The different kinds of codes used will be detailed below.  Pretty much all transmissions used the same format for the code except the Turbo 400.

Powerglide and TH350 code location. Passenger’s side of the transmission oil pan.

Saginaw 3-speed and 4-speed code location. Driver’s side of case below side cover. 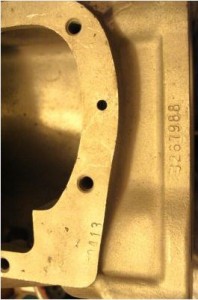 Starting in 1967, the transmission code date format changed.  Following the transmission type, was the model year, month and day of the month.  The letters used for the month were not the same exact as those used in the engine casting date. 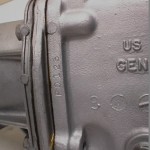 1965 and up Muncie 4-speed code location. Passenger’s side, rear edge of the main case. 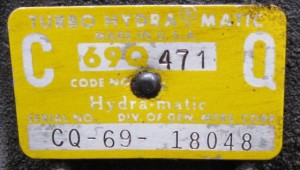 The following is a list of TH400 application codes used only on the full-size Chevrolets.

The Julian date in the transmission code started at 1 for January 1st of the start of that model year and continued past 365 until the end of production.  For example, transmissions built early in the model year in August and September would have a date code in the 200’s where as those built after January 1st would start from 366.  Transmissions assembled in July would have a date in the 500’s.

The rear axle is final component of the drivetrain to be covered on this page.  What can be found on the axle housing is the stamped axle code with assembly date, housing casting number and date housing was cast.  In 1964, the axle code was stamped on the front, right side of the differential carrier housing.  Starting in 1965, the axle code and date are stamped on the front of the axle tube on the passenger’s side.  The casting number is located on the front of the carrier on the bottom right corner.  The casting date is on the rear of the carrier, towards the top on the driver’s side.  The rear axle casting date uses the fame format as the engine casting date. 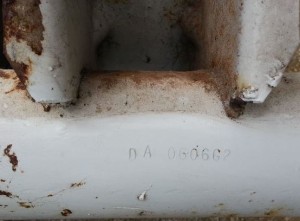 The assembly code consists of the application code, assembly date and assembly plant.  Axles were assembled at either Buffalo (code B) or Detroit Gear and Axle (code G).  One exception was in 1964 when the first letter of the application code was the plant. (A – Detroit, B – Buffalo).  On positraction axles, a letter for manufacturer of the posi unit will appear under the assembly code.  It will be a D for Dana, E for Eaton or W for Warner.

The following will be a table of application codes for the axles used in the full-size Chevrolets.  Prior to the 10 bolt/12 bolt rear axles that came out in 1965, the axle housing was the same for all ratios.  The gear set was installed in a carrier, also referred to as a “pumpkin” that could removed from the front side of the axle assembly as a complete unit.  It was possible to change gear sets simply by swapping the pumpkin.  The carrier assembly came in both positraction and non-positraction versions. SW is station wagon.